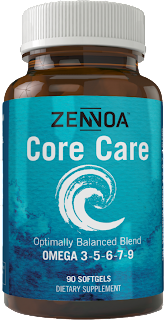 I've been using Zennoa's Core Care for about three weeks.  It's described as an optimal blend of Omegas 3,5, 6, 7, and 9.  It claims to benefit the heart, brain, joints, and skin.

When I started to use the product, I stopped taking my regular vitamin package which contains its own omegas. I took the Core Care capsules faithfully - three a day, morning, noon, and night with my meals.

Before I started, I made a list of what I hoped the Core Care would do for me. I hoped to see the brown spots on my face diminish. I wanted more energy and greater focus. I hoped to see less pain in my knee and hands which have arthritis. I have neuropathy in my feet and wanted to see that reduced. And finally I was hoping to see my fingernails harden and not split or break off as they seem to do.

I haven't seen any dramatic changes in these areas, but I have seen significant change in one thing that I hadn't listed. I have for a half a dozen years or more had cold feet, even in the summer time. At night I wore socks to bed. After two weeks of taking the Core Care Omegas, I realized my feet were no longer cold and that I didn't have to wear socks to bed. I can only assume that my heart is working better and my circulation has improved. A side effect would be reduced neuropathy in my feet.  (After a month my neuropathy was almost gone. I can walk with comfort.) The change to my feet temperature was dramatic and it was surprising.  I didn't expect this result.

Zennoa is led by Kim Asay and John Wadsworth, both former Morinda or Tahitian Noni Executives. Zennoa started in July this year. At that time my wife became a pioneer member, partly because of her great respect for Kim and John. In addition, she found the compensation plan is exceptional - better than any other she has seen.

Finding Core Care was almost serendipitous for Asay and Wadsworth, They were introduced to the Omega product by food scientists Steve Hatchett and Scott Forsberg. It's a unique blend of five Omegas 3, 5, 6, 7 and 9, which hasn't been done before. They are balanced in such a way that they enhance each other and through this symbiosis provide greater benefits.

In the book, "In Defense of Food,' journalist Michael Pollan writes about the unique relationship of Omegas 3 and 6. When they are in perfect balance, they help each other, but too much Omega 6 will block and prevent the Omega 3s from working and cause inflammation. Core Care provides that perfect balance.

Omegas are essential to cellular growth, but the body doesn't manufacture these nutrients on its own. Omegas come either from food or in supplements.  Because of soil depletion and poor food growing practices, the amount of omegas in food is less than what it used to be.  Thus, most of the benefit we get from omegas comes through supplements, like Zennoa's Core Care.

Cellular health assures we are getting the most from our bodies. Omegas are fatty acids. The human body needs them for many functions, from building healthy cells to maintaining brain and nerve function.There’s growing evidence that omegas help lower the risk of heart disease. Some studies also suggest these fatty acids may also protect against type 2 diabetes, Alzheimer’s disease, and age-related brain decline.

Cell membrane is made up of fatty acids. Every living cell needs omegas to function properly. They make cell walls more pliable so that toxins are expelled and good nutrients pass into the cells. Omega-3s come primarily from fatty fish such as cod, salmon, mackerel, and tuna, as well as from walnuts and flax seed in lesser amounts.

Forsberg and Hatchett described how they have gone all over the world to find the best ingredients for Core Care.  They found the best sources of cod oil come from Norway because of the pristine waters where the fish are caught. Norwegians have known the benefits of cod oil for centuries. Vikings began using cod oil as far back as 1000 AD. In England doctors began recommending its use in 1645. Cod oil is a premium source for Omega 3. It can be traced back to the fishing vessels that catch the cod.

Omega 7 comes from the sea buckthorn berry found in India’s Himalayan Valleys. This is the best source for Omega 7s in the world, according to the food scientists.  Sea buckthorn is an herb that is used for treating arthritis, gastro-intestinal ulcers, gout, and skin rashes. It is a source of vitamins, antioxidants, protein building blocks (amino acids), fatty acids and minerals. It improves blood pressure and lowers cholesterol, preventing and controlling blood vessel diseases, and boosting immunity. Sea buckthorn berries are used for preventing infections, improving sight, and slowing the aging process. A small amount of sea buckthorn berry has 10 times the amount of vitamin C,  eight times more vitamin A than almonds, and three times vitamin A than carrots.

Cranberry seed oil is used in Core Care because it has a unique balance of 3, 6 and 9.  It supports skin health, reproductive health and healthy cholesterol.

Mango-steen and noni are other ingredients in the Core Care. Combined in its unique formula, it supports brain and eye health, healthy skin and heart each at a cellular level. Core Care provides the correct balance of Omegas 3, 5, 6, 7 and 9.

To listen to this article, click on the following link.

To place an order through you do I go to riverglen.zennoa.com ?