Lessons From a Super Bowl Legend

By Lindsey Joe
On Super Bowl Sunday we'll partake in the annual tradition of watching the world's best football players run, jump, and smash. We'll marvel at their athleticism, and reflect on how these men push the boundaries of human capabilities. With Buffalo wings and beer in hand, we'll ask ourselves if we could do what they do. For most of us, the answer is no. And that's why we admire them. From the Pop Warner leagues to state-champion high school teams to the most elite college programs, these men were always the best of the best.

It obviously takes the toughest and most athletic men to excel in the NFL. Nicknames like "Monsters of the Midway," the "Crunch Bunch," and the "Legion of Boom" reveal just how tough you must be to play. And with all that smashing and hitting, it's no wonder tough players come and go from the League every season. In fact, there's a running joke that NFL stands for "Not For Long." So how do these men who've spent their lives as paragons of strength deal with their health after they walk off the field for good?

WHAT HAPPENS OFF THE FIELD?

I learned the answer working with one of my clients, Steve Atwater. Steve played most of his career with the Denver Broncos (who are again headed to the Super Bowl). Nicknamed the "Smiling Assassin," he was a feared free safety known for his brutal hits on opponents (here are some of his highlights). Unlike many NFL-ers, however, Steve had a long, fruitful career in the League. He even won the Super Bowl twice. Throughout his 11 seasons, he lived day to day with regimented diets and workouts. This lifestyle ensured he remained at peak physical condition. But when he left the League after the 2000 season, the daily workouts came to an end. Pretty soon he was packing on unwanted pounds, an all-too-common scenario among many former professional athletes.

Steve explains, "When we're playing football, we're working out two or three, four days a week. Then once we finish playing, normally, most people work out some but not nearly as much as they did when they played. And I was in that same boat. I worked out three days a week. But then gradually, you cut back to two days a week, then one day a week, and then sometimes I wouldn't work out any. The more sedentary that I became, it seemed like the more weight that I added on."

The sedentary life isn't surprising. As we all know, football is laden with injuries. No one makes it out unscathed, and Steve didn't go without his fair share of taking hits. In fact, he had to have surgeries on his knee, back, and shoulders. As a result of these medical procedures, Steve, at times, had difficulty getting back into a routine of working out. He even became a persistent procrastinator. He knew the importance of exercising and eating well, but he easily distracted himself from taking action. As it turned out, however, despite his surgeries, his reluctance to get back into a routine of healthy living was a product of his mindset.

Steve is open about this, saying, "Up until I discovered Retrofit, my biggest hurdle was in my mind. I tried to lose weight several times before, and I failed each time. After a while, I began to believe that I didn't have the will power to lose weight, or that I wasn't disciplined enough to lose weight. It started to affect my self-esteem and confidence. I sometimes felt completely out of control when it came to eating. I sometimes didn't recognize the person in the mirror. I had everything available for me to lose weight, except a good plan."

For a Registered Dietitian like me, it's thrilling to work with someone who wants (and is ready) to improve. This is why Steve is so great to work with. Along with me, Steve's Retrofit team of experts includes an Exercise Physiologist and a Behavior Coach. When Steve started Retrofit, we were able to assess his areas of improvement and create a plan that works for his current lifestyle. Retrofit was able to show Steve he didn't need to be as intense as he once was. He simply needed to introduce small changes to his daily routine. And he was more than willing to listen and do what he knew he needed to.

Like many of us, Steve enjoys food. But Steve is a little different. There was a time when he could eat whatever he wanted, and within a few hours on any given Sunday, he'd burn off every calorie. However, with his playing days behind him, his attitude toward food had to change, especially if he was to lose weight successfully.

Steve stands at 6'4", and at the height of his career, he weighed around 220 pounds. After he retired, his weight shot to nearly 280 pounds. His eating habits became erratic. He says, "I knew I had a problem, especially when it came to large, multiple servings. I couldn't resist. I knew I needed more discipline." But he also found himself skipping lunch up to five times a week, leading him to indulge on potato chips, popcorn, and sugary fruit snacks. Whether it was intentional or a product of his busy schedule, skipping meals was an unwanted habit working against Steve and his health.

So with regard to his food choices, I recommended the following:

Log food daily
Steve was diligent about this right from the start. Food logging was critical to helping him bring more awareness to his eating habits. With this data, we were able to identify certain patterns that were working against his weight loss efforts. For example, he was skipping 83% of his meals, particularly lunch.

Enjoy regular meals throughout the day
By making it a priority to fuel up mid-day, Steve was able to avoid constant snacking later on, which was initially working against his weight loss efforts.

Serve more balanced meals according to "50/25/25"
I encouraged Steve to start eating a more balanced plate - 50% produce, 25% lean protein, and 25% whole grains. Once Steve found the right routine for his meals and snacks, we were able to have more discussions around his food choices and portions. I helped Steve make healthier tweaks to foods he already enjoyed. For example, I suggested he go for the "Make It Lite" option at California Tortilla, a favorite restaurant of his. This small decision nearly halved the calories from his original choice. With little decisions like this, not only was he eating more balanced to feel full and satisfied, he was allowing himself to enjoy in moderation the things he already loved.

The biggest challenge we came across while working with Steve was his mindset. He's a very driven man with many impressive achievements. After all, how many of us can show off two Super Bowl rings, let alone one? Clearly, he's a man who demands nothing less than perfection. But the truth is, if you're not competing at NFL levels, it's okay to take it slow. Progress takes time. In the beginning we would give Steve a lot of feedback around making progress even though he sought perfection. The main thing we had to get him to do was:

Lose the all-or-nothing mentality
With continued encouragement from his whole team of experts, Steve began to find that even the smallest of adjustments were, in fact, working in his favor. As he embraced this idea of gradual improvement, he began to see results on the scale. This really gave him reassurance and confidence in the healthy choices he started making for himself.

To date, Steve has lost 21 pounds in 32 weeks. This change clearly didn't happen overnight, but neither did anything else he achieved in his life. The little changes Steve adopted in his daily routine are now instinctive. And he and I are confident that he has the know-how to keep the unwanted weight off for the rest of his life.

But don't just take my word for it. Steve sums up his Retrofit experience best: "It didn't seem like I had done anything major. It just seemed like I was just doing the same thing but making small adjustments along the way. My wife, she would tell me, 'You eat so much differently now. You eat so much healthier.' It didn't really feel like dieting because I just made small adjustments."

Lindsey holds a Bachelor's degree in Human Ecology, and she’s received a Certificate of Training in Adult Weight Management from the Academy of Nutrition and Dietetics. She has previous experience in both medical and surgical weight loss programs. She wholeheartedly encourages the Retrofit way of healthy living. Lindsey has a passion for all things food and fitness. You can probably find her sipping a cup of joe and sharing her latest food and fitness finds on the interwebs.

Heat Up Your Super Bowl with These 3 Mouth-Watering Recipes from NYC Nutritionist!

This year the Super Bowl is taking place for the first time in the cold weather climate of New Jersey's MetLife stadium. Whether you plan on participating in activities on Manhattan's "Super Bowl Boulevard" or watching out of the comfort of your home, a warm meal is the kicker to your Super Bowl experience. New York City's FranciCohen is a certified nutritionist, personal trainer, and exercise physiologist who has created three exciting and mouth-watering recipes for your Super Bowl spread. 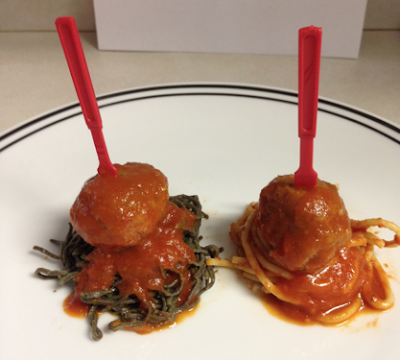 1.     Take you chopped meat and ground turkey and mix together in a large bowl. Then, add in eggs, bread crumbs, and salt and pepper and mix with hands until well incorporated.
2.     In a frying pan, heat a thin layer of canola oil on medium for 3-4 minutes. Then add meatballs, 1 by 1, making sure not to overcrowd the pan.
3.     Once the meatballs are lightly browned on both sides, add marinara sauce. Then turn the heat up, cover and bring to a boil.
4.     Reduce heat and summer for 10-15 minutes until meatballs are fully cooked.
5.     For the pasta, cook both spaghettis as instructed on package
6.     On a serving plate, alternate swirled bundles (swirl with a fork) of black bean spaghetti and artichoke spaghetti. Spoon sauce over each and top with a single meatball.
7.     Secure meatball and pasta bundle in place with skewer or toothpick 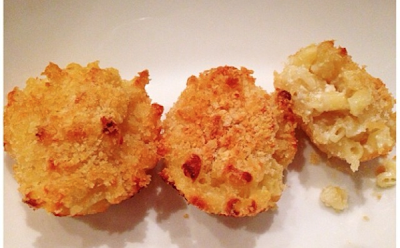 
Pre heat oven to 375º.Start by melting the butter in a saucepan on medium heat. Then, whisk is flour to form a rue and gradually whisk in the skim milk. Bring to a boil.Reduce heat and add Muenster, American, and cheddar cheeses and then turn off the stove on cheese sauce.For the pasta, cook noodles as directed on box (al dente is best).After draining the noodles, return them to the pot and pour cheese sauce over pasta. Mix well.Take the Mac n cheese mixture and spoon it into greased muffin tray.Top each mini Mac n cheese with some panko flakes
8.     Place tray in the oven and bake until cheese mixture sets and tips of each popover is brown and toasty (Approx. 10-15 min). 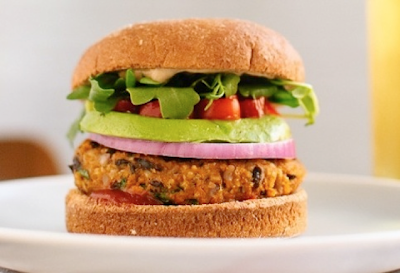 1.     Start by cooking the quinoa as directed on package, substituting vegetable broth instead of water.
2.     Meanwhile, in a saucepan sauté scallions 3-4 minutes until lightly brown and translucent then add in garlic.
3.     Add sweet potato and sauté a few minutes more, until potatoes are tender
4.     Lastly, add chick peas and cheese and remove from stove
5.     Mash the mixture together leaving it slightly chunky. Then add the drained quinoa and breadcrumbs to mixture. Finally, add eggs, salt and pepper and mix well.
6.     In a frying pan, heat olive oil over medium heat.
7.     Form 3" patties out of mixture with your hands and place into frying pan. Cook patties 3-4 minutes on each side until crispy and lightly browned
8.     Serve on multigrain bun with lettuce, tomato, a few slices of avocado and a drizzle of spicy mayo!

*Note: For a healthier version, wrap the sliders in iceberg lettuce!