Amherst, MA - What is Tent? Tent offers twentysomethings a chance to explore their area of interest through the lens of Jewish culture. Tent is an immersive, intense, series of week-long workshops for young Jewish adults focusing on comedy (Los Angeles in March), creative writing (Amherst, MA in June), and theater (New York City in August). Each of these subjects – comedy, creative writing, and theater – have rich Jewish histories and Tent’s goal is to provide an opportunity for participants to connect with those histories. The workshops are designed to help participants understand their place as Jews in a multicultural society, to answer their questions about who they are and where they come from, and to help them explore the vast, complex, and immediately relevant cultural side of their identity.

An appreciation of Jewish culture can be a portal into deeper and more informed Jewish self-awareness. Tent aims to offer young North American Jews a new way of seeing their Jewishness: as something deep, rich, alive, and inseparable from cultural forms to which they are already committed. As Josh Lambert, Tent's Program Director, explains "Modern culture can inspire us to think imaginatively about what Jewishness means. And vice versa. Many of the young Jews I know feel more connected to Jewish culture than to religion or politics. Tent will be about exploring how these cultural enthusiasms--for comedy, cooking, law, and so many other fields--can become a bigger part of the national discussion of what it means to be Jewish."

According to Lambert, "The paucity of substantive Jewish cultural education for twentysomethings is emphatically not the result of apathy. When it comes to cultural expression, Jews in their twenties are anything but apathetic. Go to a stand-up comedy show, an indie rock concert, or an Off-Off-Broadway performance and you'll find throngs of effusive young Jews. Glance through the stacks of applications to MFA programs and you'll discover hundreds of Jewish young people competing for the opportunity to discuss literature or art. Speak to law students about tort reform, or to young foodies about local produce: the passion is already there."

In 2013 Tent will launch with three programs, each of the workshops is offered free to accepted participants; the only cost is travel.  In the following years Tent will grow to include 30 programs by 2016. Tent’s three pilot programs are:

Tent: Comedy, a week-long seminar in the theory and practice of comedy through a Jewish lens, will take place in Los Angeles, CA, March 17-24, 2013. Participants will explore stand-up, improv, and sketch forms with comedians from the country's leading comedy troupes, and meet with performers and writers working in film and television, see Sarah Silverman’s show at Largo, talk shop with Jill Soloway, writer/producer of Weeds and Six Feet Under, and more.

Tent: Creative Writing, which is modeled on the Bread Loaf Writer's Conference, will be geared toward aspiring and practicing writers and will take place at the Yiddish Book Center in Amherst, MA, June 2-9, 2013. Have your fiction workshopped by your peers and critically acclaimed visiting writers, talk about why Jews are such a bookish people and why they’ve done so much writing, meet a New York-based literary agent and the NEA’s literature director Ira Silverberg, and more.

Tent: Theater is a week-long seminar about Jews and performance in New York City, August 4-11, 2013. Participants will meet actors, playwrights, and directors, will participate in a Q&A with playwright Tony Kushner, and will attend several current theatrical productions, Off-Broadway and elsewhere.

Applications and information are available at tentsite.org. Applications for Tent: Comedy, the first program, are due January 7, 2013 and can be submitted online here. Tent, a program of the the Yiddish Book Center, is funded through the generous support of Judy and Michael Steinhardt.
Posted by John Fisher at 10:01 AM No comments:

Healthy eating on the go

By: Denise Austin, author of Side Effect: Skinny


Heading out of town? If you travel a lot, you know how tricky it can be to stick with your eating plan. But just because you're in a hotel or a restaurant doesn't mean you can't eat well. Follow these tips and you'll be good to go! 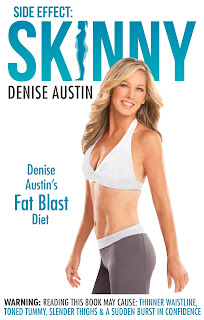 Eat As You Would At Home. Control the size of your portions at each meal. Portion control can make – or break – your dieting efforts, especially with restaurants supersizing meals or fad diet plans that encourage unlimited amounts of protein or other foods.
If Your Order Arrives and It Is Enough for 3 People, Only Eat 1 Sensible Portion. If you can have a fridge in your hotel room or are staying with friends, you can ask the waiter to box up the extras before you even start to eat so you won't be tempted – and you can enjoy the leftovers as a guilt-free meal on another day. Better yet, ask about portions when you order and then see if your friends want to share.
Snack Before You Go. If you know you'll be tempted by rich foods, have a healthy snack before dinner. You'll feel fuller and will be less likely to indulge once you arrive at the restaurant.
Know the Lingo. Avoid menu items that are described using the words au gratin, crispy, fried, tempura, alfredo, cheesy, butter, butter sauce, crunchy, beer-battered, crusted, pan fried, or creamy. These are buzz words that signal major calories. Stick with choices that are baked, broiled, poached, or steamed instead.
Substitute. If a dish comes with fries, don't hesitate to ask for it with a salad, baked potato, or a steamed veggie instead. Likewise, if a meat or veggie is prepared with lots of heavy oils, ask about lighter preparations or choose another dish. Restaurants want to make you happy (you are the customer, after all), so chances are they'll be willing to help.
Share. If you are dining with a friend, split an entrée, an appetizer, or even a dessert! It is a simple way to cut calories and not feel deprived.
Don't dread the pounds you envision you'll gain on your next vacation or fall off the wagon on your next trip. By thinking ahead, you will be equipped to travel in healthy style!

Known as "America's favorite fitness expert," Denise Austin has sold over 24 million exercise videos and authored more than 12 books on health and fitness. As a worldwide fitness phenomenon, she has created a loyal audience with her two major television shows: Getting Fit, which ran for 10 years on ESPN and continued under the new name Denise Austin's Daily Workout, and Fit & Lite, both on Lifetime.

Denise served two terms on the President's Council on Physical Fitness and Sports. She has testified before the U.S. Senate Committee on Health, Education, Labor, and Pensions, helped launch the new food guidance system of the U.S. Department of Agriculture, and was recently honored by Woman's Day magazine and the American Heart Association with the Red Dress Award for her contributions to heart health. Married for over 25 years to Jeff Austin, they have two teenage daughters, Kelly and Katie.

Side Effect: Skinny is exclusively available for purchase at www.thebooknook.com as of November 26, 2012.

According to findings of the World Health Organization's global mental health survey, anxiety disorders are the world's most common psychiatric disorders. There are many factors that contribute to developing a mind that is prone to intense anxiety, but there are also many things you can do to change the way it works. Research has shown that one of those things, practicing kindness and compassion, soothes experiences of fear, while self-critical thoughts tend to intensify them. If you become frustrated with your anxious reactions or consistently try to talk yourself out of your anxiety, it may be time to try a different approach – one that can be found in the new book by Dennis Tirch, PhD, The Compassionate-Mind Guide to Overcoming Anxiety: Using Compassion-Focused Therapy to Calm Worry, Panic, and Fear.

This user-friendly program, using an integration of Behavior Therapy, Buddhist Psychology, and Evolutionary Neuroscience, will help you learn to be kinder to yourself, soothe your anxiety, and step forward into a life of meaning, purpose and vitality. Developed through decades of research and innovation, the book provides a systematic, responsive and scientifically sound approach to the problem of human suffering.

The Compassionate-Mind Guide to Overcoming Anxiety, complete with worksheets, exercises, and meditation practices, includes everything you need to learn mindfulness and compassion-focused skills for redirecting your anxious thoughts  and allowing yourself to enjoy a more peaceful life.

"I intentionally wrote this book," says Dr. Tirch, "with the voice of a compassionate friend and fellow traveler, who will explain the underlying theory of how compassion soothes our fears and brings us greater courage. The theory is presented in a gentle and step by step way, and techniques are quite easy to learn and practice , on your own, or working with a therapist, teacher or friend."

The Compassionate-Mind Guide to Overcoming Anxiety is divided into two sections:


"My hope is that the practices I describe in The Compassionate-Mind Guide to Overcoming Anxiety," adds Dr. Tirch, "will open the way to greater self-compassion, well-being, and a growing capacity to bring mindful awareness and kindness into your life, moment by moment."

Dennis D. Tirch, PhD, is associate director of the American Institute for Cognitive Therapy, founder and director of The Center for Mindfulness and Compassion Focused Therapy and serves as adjunct assistant clinical professor at Weill-Cornell Medical College. He is coauthor of books and articles on mindfulness, acceptance, and compassion, and maintains an active research program in these areas with Robert L. Leahy. Dr. Tirch is a fellow of the Academy of Cognitive Therapy and founding co-president of the New York City chapter of the Association for Contextual Behavioral Science.

The Compassionate-Mind Guide to Overcoming Anxiety can be purchased from www.amazon.com, www.barnesandnoble.com and through all major booksellers.