Platte River Valley is on migration path for Whooping Cranes 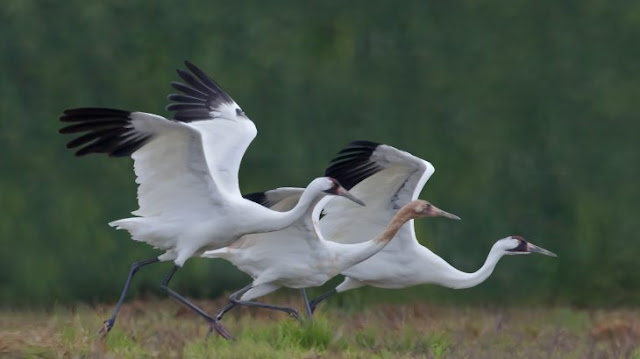 In the morning we stopped at the Nebraska Nature and Visitor Center which is off exit 305 on Interstate 80. The Center was closed during the pandemic. So we drove further west on the Interstate to the Rowe Sanctuary, which is about five miles south of the Interstate at exit 285. While the Center is closed, Audubon volunteers are onsite from 10 a.m. to 2 p.m. daily and have opened blinds which allow visitors to view the Platte River and Basin, looking North.

The Platte River is on the spring migration route for Whooping Cranes and Sandhill Cranes. Some 500 plus whooping cranes migrate through the Central Flyway during the months of April and October/November.  This is far surpassed by the number of Sandhill Cranes, which number is over a million. An endangered bird, the Whooping Crane is the tallest bird in North America - over five feet tall, with a wing span of 7.5 feet. If you get a chance to see one (we didn't), its imposing stature, angel white plumage, black mask, and red crown make it an amazing sight. The Whooping Crane nests in Wood Buffalo National Park in Canada. If you see a whooping crane, please report it to Whooper Watch (888.399.2824) or the Nebraska Game and Parks Commission (308.865.5310).

When we arrived after noon at the Rowe Sanctuary, a few bald eagles were feeding on bird carcasses but the Sandhill Cranes had lifted off and were feeding in farmers' fields across from the Center. We watched in fascination as hundreds of Sandhill Cranes dropped down into the fields to feed on last fall's stocks and leftover corn.  The volunteers indicated that about 600,000 Sandhill Cranes migrate through the Platte River Basin in March and April on their way to nesting grounds on the tundra in Northern Canada, Alaska, and even Siberia. They stay in the Platte River area about three weeks, the volunteers said. 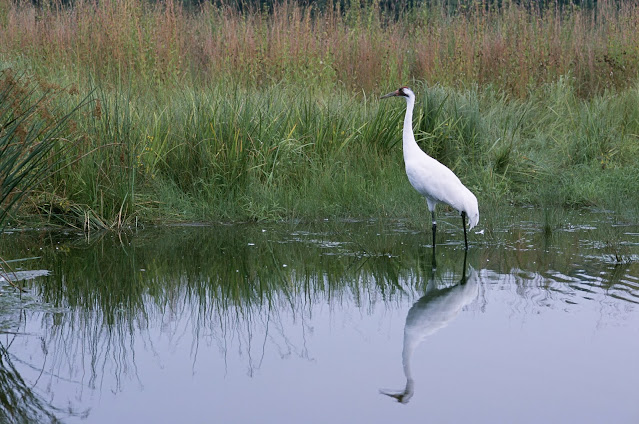 Posted by John Fisher at 7:28 AM No comments: