TAOS, NM—Taos Pueblo in Taos, New Mexico has made Fodors list of the top 20 "U.S. Places to See Before You Die." Taos Pueblo is the only living Native American community to be designated both a World Heritage Site by UNESCO and a National Historic Landmark.

The article, published on Aug. 23, 2013, says of Taos Pueblo: "As though frozen in time, Taos Pueblo appears much as it did when the first Spanish explorers arrived in New Mexico in 1540, and inside, the traditional Native American way of life endures." The article encouraged visitors to strike up a conversation with pueblo residents, and to try the popular fry bread.

Taos Pueblo has also been called one of the top 10 "Classic American Experiences" by CNN Travel and top 10 "Places Every American Should See" by Budget Travel, among other accolades.

Taos Pueblo is celebrating the feast day of the Pueblo's patron saint, St. Jerome (San Geronimo), on Sept. 29 and 30 with San Geronimo Eve Vespers and San Geronimo Day which includes traditional pole climbing. The event is open to the public; however, cameras are not allowed during religious ceremonies. For more information on Taos Pueblo, visit taospueblo.com or call 575-758-1028.

Also on Sept. 29 and 30, as part of the Town of Taos' Grand Fall Arts, local artisans will open their studios for the 16th annual "High Road Studio Tour." The tour is one of the most renowned art tours in the Southwest, where art lovers can see or purchase pottery, fiber arts, retablos, paintings, sculptures, photographs, and more from well known artists along the scenic 30 mile High Road route. Visit taos.org/art/grand-fall-arts for complete details.

Fodors.com is a well-known guide and review resource for travelers and vacationers. Fodors receives more than 1.4 million page views per month, and more than 516,000 unique visitors per month. Visit fodors.com to read the full article.

About Taos Pueblo
Taos Pueblo has been continuously inhabited for more than 1,000 years. The pueblo is made entirely of adobe - earth mixed with water and straw that is poured into forms to make sundried bricks. Approximately 150 people live within the Pueblo full time, while other families live on Pueblo land but outside the walls. There are more than 1,900 Taos natives living on Pueblo lands. The Pueblo natives are 90 percent Catholic, though ancient religious rites are still practiced, which are an important part of Taos Pueblo life. San Geronimo Catholic Church was built on the Pueblo in 1850. Tiwa is the native language at Taos Pueblo, though Spanish and English are also spoken.

Major Health and Economical Benefits of the Mediterranean Diet (IACCW)


In the height of the childhood obesity epidemic, IACCW is partnered with the Los Angeles Unified School District (LAUSD) for a campaign called Authentically EATalian to bring gardens and cooking classes with prominent LA-based chef into the most underserved elementary schools in Los Angeles, to educate students and their parents on how to benefit from the Mediterranean diet while having low household income.

Adopted by many celebrity women to slow the aging process, the Mediterranean Diet can also help decrease the risk of mental illnesses. For example, Omega-3, B-vitamins and Vitamin C, all commonly found in Mediterranean food, contribute to mental and cardiovascular health as well as decreasing chances of Alzheimer's disease, depression and attention deficit-hyperactivity disorder. "Authentically EATalian"
PROJECT OVERVIEW
"Authentically EATalian" is a multifaceted, bi-coastal initiative launched by the Italy-America Chamber of Commerce West in Los Angeles, with the support of the Italian Ministry of Economic Development and Assocamerestero - the Association of Italian Chambers of Commerce in the world. Today there are 76 Chambers in 50 countries with 140 offices and over 24.000 member companies. The Italian Chambers of Commerce Abroad carry out a wide range of activities facilitating the access of Italian companies to the respective markets and promoting the establishment of strategic business relations. Inspired by the Let's Move campaign launched by First Lady Michelle Obama, "Authentically EATalian" aims at giving children and their families a new perspective on food, helping them make better choices, one meal at a time.
OBJECTIVE: promoting Italian food and lifestyle while helping fight childhood / adult obesity in the US through nutrition education based on the Mediterranean diet principles, fitness and family fun activities.
THE ISSUE: Over the past three decades, childhood obesity rates in America have tripled. Today, almost one in every three children in the States is obese or overweight. The numbers are even higher in African American and Hispanic communities, where nearly 40% of the children are overweight or obese. Putting a STOP to this ever escalating epidemic is crucial. If not, one third of all children born today in America will suffer from diabetes at some point in their lives. Many others may face chronic obesity-related health problems such as heart disease, high blood pressure, cancer and asthma.
TARGET: grade school children from selected LA School District's public schools, families and fitness enthusiasts.


About Chef Nicola Chessa:
Chessa joined restaurateur Piero Selvaggio's award-winning Valentino Restaurant Group in 2003. He trained in Las Vegas as a sous chef under James Beard award-winning Chef Luciano Pellegrini, at Valentino Las Vegas inside The Venetian-Resort-Hotel-Casino and after a short time was named Executive Chef at Giorgio Ristorante, where he still oversees kitchen operations and menu.


About Dr. Dena Herman:
Dr. Herman received her doctorate and master's degrees in public health from UCLA and her master's in nutrition sciences from Friedrich-Wilhelms University of Bonn, Germany.  She has expertise in both pediatric and life course nutrition.  Dr. Herman teaches in the UCLA Fielding School of Public Health and the David Geffen School of Medicine.

Posted by John Fisher at 9:34 PM No comments:

CHICAGO – Treatment of chronic hepatitis C virus (HCV) genotype 1 infection with the interferon-free regimen of sofosbuvir and ribavirin resulted in a high sustained virologic response rate in a patient population with unfavorable treatment characteristics, according to a study in the August 28 issue of JAMA.

“Chronic infection with hepatitis C virus is a major cause of chronic liver disease, end-stage liver disease, hepatocellular cancer and remains the leading indication for liver transplants in western countries. The HCV epidemic in the United States is centered in large urban areas among populations with a high prevalence of unfavorable traditional predictors of treatment response,” according to background information in the article. “Recent studies show that interferon-free, directly acting antiviral agent-only regimens can successfully achieve sustained virologic response (SVR); however, populations traditionally associated with poorer treatment outcomes have been underrepresented.”

Anuoluwapo Osinusi, M.D., M.P.H., of the National Institutes of Health, Bethesda, Md., and colleagues evaluated the efficacy of sofosbuvir administered in combination with weight-based or low-dose once daily ribavirin in a treatment-naive population with unfavorable characteristics of treatment success. The randomized, 2-part, phase 2 study included 60 patients with HCV genotype 1 enrolled from October 2011-April 2012. In the study's first part, 10 participants with early to moderate liver fibrosis were treated with 400 mg/d of sofosbuvir and weight-based ribavirin for 24 weeks. In the second part, 50 participants with all stages of liver fibrosis were randomized 1:1 to receive 400 mg of sofosbuvir with either weight-based or low-dose 600 mg/d of ribavirin for 24 weeks. The primary outcome was the proportion of participants with undetectable HCV viral load 24 weeks after treatment completion (sustained virologic response of 24 weeks [SVR24]). Eighty-three percent of the participants were black; 66 percent, men; and 23 percent had advanced liver disease.

The combination regimen was safe and well tolerated with no death or discontinuation of treatment due to adverse events. The most frequent adverse events were headache, anemia, fatigue, and nausea, the severity of which ranged from mild to moderate.

“This study demonstrates the efficacy of an interferon-free regimen in a traditionally difficult-to-treat population while exploring the reasons for treatment relapse. In this study, treatment of chronic HCV infection with a single directly acting antiviral agent (sofosbuvir) and weight-based ribavirin resulted in a high SVR rate in a population with unfavorable traditional predictors of treatment response compared with reported rates with currently used interferon-based therapy in similar populations.”
(JAMA. 2013;310(8):804-811)

Editor’s Note:  Please see the article for additional information, including other authors, author contributions and affiliations, financial disclosures, funding and support, etc.
Posted by John Fisher at 9:06 PM No comments:

Enjoy the Last of Summer with These Seasonal Recipes 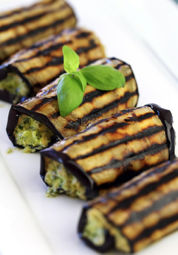 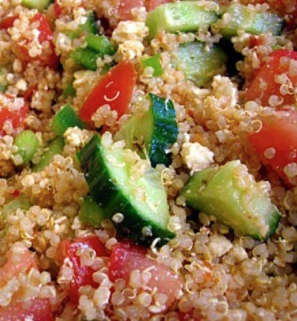 1.     Whisk together the lemon juice, vinegar, oregano, garlic and some salt and pepper in a small bowl.
2.     Slowly whisk in the oil until emulsified. Let sit at room temperature while you prepare the salad to allow the flavors to meld.
3.     Combine the quinoa, 2 cups water, 1 teaspoon salt and 1/4 teaspoon pepper in a small saucepan, bring to a boil and cook until the water is absorbed and the quinoa is tender, about 15 minutes.
4.     Transfer to a bowl, fluff with a fork and let sit for 5 minutes to cool slightly. Add the tomatoes, olives, green onions, red onions, cucumbers, feta cheese, and dressing and toss to coat. Cover and refrigerate for at least 1 hour and up to 8 hours before serving. The longer it sits the better the flavor.
5.     Fill tomatoes, arrange on platter and serve!

1.     Sauté onion on med-high heat, add 1 cup rice and sauté together. Then add 1 1/2 cups boiling water and salt.
2.     While rice is cooking, wash and peel the squash, leaving stripes of the green peel.
3.     Cut squash in 1/2  lengthwise and scoop out insides with a spoon.
4.     In a bowl mix cooked rice, chick peas, allspice and olive oil, then fill the squash.
5.     Line baking dish with stuffed squash in one layer.
6.  Sprinkle dried apricots on top along with crush garlic, salt and mint.
For sauce: In a bowl mix water, fresh lemon juice, maple syrup and 1 tbsp. apricot preserves. Taste and adjust to your liking.  Pour over stuffed squash and cover with aluminum foil lined with parchment paper and put it in the oven at 350ºF. Cook for 1 -1.5 hours.

A No Nonsense Approach to Fitness, Health & Your Life 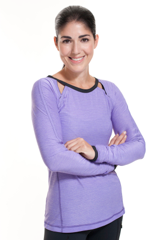 Franci Cohen is a personal trainer, certified nutritionist, exercise physiologist and creator of SPIDERBANDS®, a total-body cardio resistance workout that leverages gravity and your bodyweight with other intense exercise modules such as rebounding, kickboxing and indoor cycling.  With over 18 years of experience, Franci has been a mainstay in the fitness and nutrition industries. Franci believes in a tough love approach to fitness and health.  "We all have our fitness wake-up call at some point in our lives and it can be a powerful catalyst for change," says Franci. "Unfortunately, many people overcompensate and try to change everything at once, which is a disaster. Making lasting change involves going through stages that aren't necessarily linear.  People fluctuate and transition between the stages. Knowing how to move through them can get you where you want to be."

Franci devotes much of her time to Fuel Fitness, a specialty fitness center in Brooklyn, NY and continues to teach group fitness classes, train clients and broaden her perspective in all areas of fitness, nutrition and wellness.  She designs unique fitness modules and group exercise programs for her clients utilizing the most effective and popular products, tools and exercise equipment available.  "Exercise is one of the most important things you can do for your health, but sometimes it's hard to just get motivated.  My goal is to keep it fun and interesting by creating out-of-the-box programs that wow my clients with both the innovative nature of the classes, as well as with the rapid results they see in their bodies!  My classes are the ultimate playground where fitness meets fun, and nothing is off limits!"

Franci has been married for 14 years and currently lives in Brooklyn, NY with her husband and four children.

Posted by John Fisher at 7:04 PM No comments: