Get on with your life

Free speech is under attack, says Dave Rubin, but the best thing we can do to combat it, is get on with our lives.

He said he was so addicted to social media - and so anxious about what was happening in the world around him - that he caught a case of FOMO (fear of missing out). He attacked the disease head on and gave it up cold turkey. He locked his cellphone in a safe. 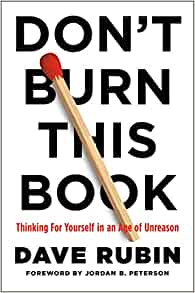 I just finished listening to Dave Rubin's "Don't Burn This Book: Thinking for yourself in an Age of Unreason." In the last few minutes of the book, he gives some sage advice. This is a summary with some of my own words added.
By getting rid social media, Dave Ruben says he became more present in his life.

Posted by John Fisher at 4:05 PM No comments: