Mesquite is about an hour and a half east of Las Vegas on I-15 on the border of Arizona. Twenty seven miles further you are in St. George, Utah. As the gateway to Nevada, Mesquite is not only known for gambling but also as the home of Virgin River Motel and Casino. Along highway I-15 going south are a multitude of bill boards advertising $30 rooms with breakfast at the Virgin River.

On my way back to Provo, Utah I thought I would take advantage of the $30 offer, but no luck. I was supposed to phone for a reservation and all $30 rooms were gone. However, what I got was almost as good minus the breakfast. For $35 including tax I got a non-smoking room with two queens, one lower than the other, and half a dresser. The other half must be next door in room 4331. Despite the Spartan room it was clean, had a 19 inch TV, clean towels and three soaps. When I called my wife, she told me to check for signs of bedbugs. Not a one.

Before checking in I checked out the hotel prices online while eating a $12.99 t-bone and shrimp at the River Cafe in the casino. The meal was delicious although it was a little bigger than I should have eaten. The price online was the same as at the registration desk. The next closest price in town was $79.99. Virgin River was a steal at less than half the price. A great place to stay whether going south or north on I-15. 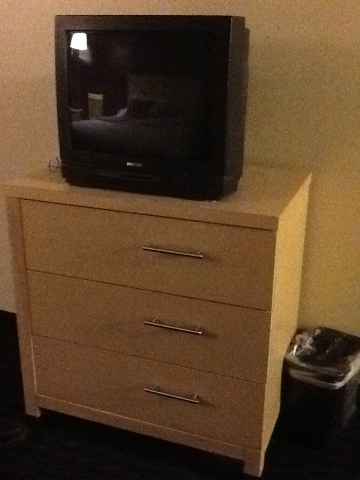