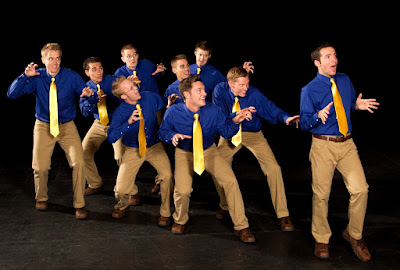 I've heard lots about BYU's Vocal Point, swatched them on NBC's "The Sing-Off," but hadn't seen them live until last night at the Covey Center in Provo, Utah.

Vocal Point, a nine-man a capella group, is part of the BYU School of Music and one of 18 performing groups sponsored by the university. It is the most-requested performing group at BYU and regularly performs in front of sold-out crowds on and off campus.

Last night they had all the great enthusiasm the group is known for. However, their performance was not as good as what we saw on NBC. They just didn't seem to have it all together. This semester they have four new members that didn't sing on the TV series and last night for the first time they used ear plugs so they could hear each other. (They need to get the nine from the TV show together and on the road before they lose the opportunity and fame that singing in front of 4 million people a week brought.)

Last night some great performances stood out. They're using some of the older members who hadn't sung solo before, including my cousin, Robert Seely, who has a fantastic base voice. Another highlight was Tanner Nilsson, who was the winner of an international beatboxer contest last year. He showed his beatboxing skills on the vocal drums. The oldies music was fantastic, but the numbers that touched me most were the two hymns. One by Orson Whitney was called "Savior Redeemer of My Soul."

The performance lacked polish partly because they are too long on narrative. They talked too much, usually about their great values. Don't tell me you have great values, show me through your music.

Music makes me look back. It helps me remember the good times. Vocal Point did that for me last night.
Posted by John Fisher at 6:13 PM No comments:

Why sleep is so important