I watched Skyfall for the second time last night. It is the 27th James Bond movie in 50 years.

I first became acquainted with James Bond and author Ian Fleming in 1963 at a friend's home in Belgium. He had read several Ian Fleming novels and watched Dr. No which was the first James Bond movie, coming out in 1962.

Since that time I have seen each of the Bond movies, which are marked by action, romance, and thrilling twists and turns in plot. While lots of people die, the viewer sees none of the gore of so many action films. The special effects may have improved but the action has not deteriorated into the blood and gore of so many current films. Action is not limited to fights, although that is still a strong element in the Skyfall movie. One of the best scenes was a motorcycle chase across the rooftops of the bazaar in Istanbul.

Romance has not changed either. While Bond is still a lady's man, the sex is no more explicit today than it was 50 years ago. Another aspect of romance is the places the movies take us to. I'm a world traveler because of the James Bond movies. The view of Shanghai at night with its multitude of lights in Skyfall was amazing. London can be uninteresting, but not when standing on a rooftop looking at a panorama of many flags. I felt national pride, a strange feeling for someone whose ancestors left Britain 150 years ago for a better life in America.

My Literature teacher taught me that there is only one plot--hero beats villain and gets girl. The rest of the story is twists and turns. Plenty of twists and turns exist in Bond movies, but he never gets the girl. In Skyfall Bond loses two girls, both under tragic conditions. The last one was completely unexpected and heart-rendering. That was the twist that ended Skyfall. Enough said.

Skyfall was all about retirement. It was foreshadowed early in the movie when we saw JMW Turner's painting in London's National Gallery of the Fighting Temeraire being tugged to her last berth to be broken up. Ian Fleming wrote 11 Bond novels and five other authors have added to his work. Maybe it was time to retire Bond, but not so. There will be another Bond movie and probably many more after that. 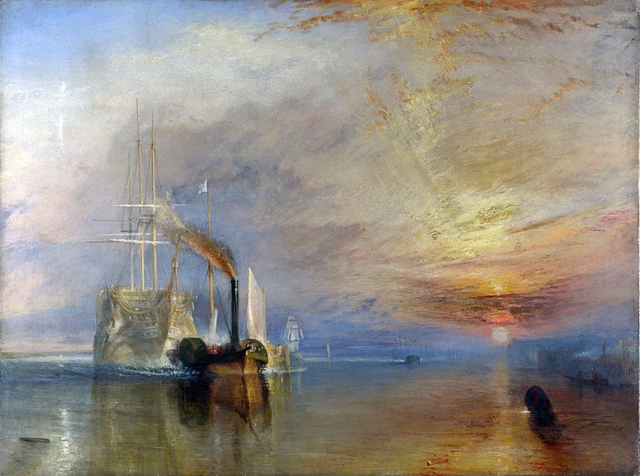