NO FILLERS, GLUTEN FREE & KOSHER, TOO! 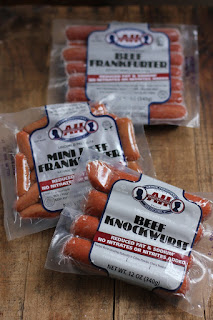 Hillside, NJ, August 9, 2016 - Hot dogs are one of those quintessentially American foods, one that no summer is complete without. But when it comes time to choose a hot dog for your cookout, it can sometimes be daunting to find the right one, especially if you're looking for healthy options.

Abeles & Heymann, makers of award-winning premium kosher hot dogs and deli, offers a few healthier choices for grilling this summer - uncured, no nitrates or nitrites added all-beef frankfurters, and uncured franks with the added option for lower sodium and fat content. These juicy, plump and heathier hot dogs have no fillers, are gluten free and kosher, too.

"Uncured hot dogs, like cured hot dogs, are fully cooked and should be prepared the same way. In fact, you'll have a hard time telling the difference in taste between these and our regular hot dogs, which were voted top dog in 2013, beating out major brands. Years of development and refinement have made this into the best kosher uncured hot dog on the market today," says Seth Leavitt, CEO of Abeles & Heymann.
There are several ways to heat fully cooked Abeles & Heymann Uncured Hot Dogs:
Grill: Place your hot dog over medium heat and turn as it starts to brown, about 2-3 minutes on each side. Total heating time is about 8-12 minutes. When grilling frozen hot dogs, heating times will be slightly longer.
Steam: Use a Dutch oven fitted with a steamer rack. Fill the pan with water just below the rack. Bring water to a boil, and then reduce to low heat. Add your hot dogs to the steamer basket. Cover tightly and steam 5-7 minutes or until heated through.
Boil: In a pot, bring water to a boil. Reduce heat and carefully add hot dogs. Simmer for about 5 minutes. Frozen hot dogs will take a little longer to heat through.
Microwave: Though not recommended, the microwave oven should only be used if no other heating method is available. Microwaves vary in power and features, so experimenting with heating times may be needed. Thaw hot dogs before placing on a microwave safe plate. Use a fork to poke holes in it. Heat in 30 second intervals until desired temperature.
Many Abeles & Heymann premium deli products can be found at Costco and BJ's, national chain supermarkets such as Stop & Shop, Shoprite, Kroger, Ralph's, and Acme, as well as independent kosher stores coast to coast.

About Abeles & Heymann
In 1954, Oscar Abeles & Leopold Heymann opened a butcher store in Washington Heights, NY known as Abeles & Heymann.  In 1997 Seth Leavitt and his attorney cousin David Flamholz bought out Mr. Heymann and his wife Sophie. Heymann, the only surviving partner, stayed on for over a year to teach the two young guys how to make a hot dog among other things, in the Bronx facility.

Since then the family-run company has moved to a state-of-the art facility in New Jersey, and has seen an over tenfold increase in sales. To grow the business even further, Abeles & Heymann partnered with the manufacturing arm of an Israeli Kibbutz, (Maadany Yehiam, makers of the Hod Golan line of turkey products) and presently produces over 1,000 tons of quality glatt kosher deli a year. In addition to its no nitrate added, reduced-fat and lower-sodium hot dogs, the company produces all-beef hot dogs, beef fry, kishka, cervelat, knockwurst, and cocktail franks, as well as salami, chipotle franks, corned beef and pastrami.

"Our recipes are still a closely guarded secret," says Seth Leavitt, 44, CEO of Abeles & Heymann, headquartered in Hillside, New Jersey. In 2005 and then again in 2013, Abeles & Heymann kosher franks were voted top hot dog, each time beating out large conglomerate producers including Ballpark, Applegate Farms and Hebrew National, among others. In 2005 the St Louis Post Dispatch wrote: "3 stars-medium red color, nicely chewy, well balanced flavor, not a lot of saltiness; nudged out Ballpark for top spot with bit better overall flavor." And in 2013, The Forward hailed Abeles & Heymann hot dogs as "spectacular, juicy and meaty with a crisp bite and rich beef flavor."
All Abeles & Heymann products are certified glatt kosher by the Orthodox Union (OU), Kehillah Kashrus and Rabbi Yecheil Babad. For additional information about Abeles & Heymann, or to use their store locator, go to: www.abeles-heymann.com.  Like them on FB https://www.facebook.com/abeles.heymann/, and follow them on Instagram https://www.instagram.com/abelesheymann/

Posted by John Fisher at 1:38 PM No comments: